Summing It All Up 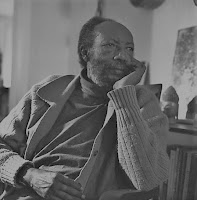 Summing It All Up

If you were to sum up in a few words the trajectory of your life, what would those words be? "Can’t drink coffee on a running horse?" "The best is yet to come?"

"Life goes on" was how the octogenarian Robert Frost (d. 1963) responded to a journalist’s query. Frost is gone, but his memory lives on.

What about Tsegaye Gabre-Medhin (1936-2006), Ethiopia's preeminent communitarian poet-playwright? We'll look at the quintet briefly below, even as we recall the glory days of Ethiopian theater (እናት ዓለም ጠኑ Enat Alam Tannu, an adaptation of Brecht's Mother Courage; ሀ ሁ በስድስት ወር Ha Hu Basidst Wer, The Alphabet in Six Months), each of which was packed for months on end, with audiences poring over the playwright's perky prose like possessed monastic holy men. Not unlike the prophets of old, Tsegaye had a disposition to carry in his person the tragedies, beauty, and hopes of the Motherland.

The verse was likely composed in New York City. The playwright had come there to receive regular dialysis—something he did not foresee would keep him away from his beloved country forever. Alas, his one wish to have his friends arrange for "one last visit" never materialized.

Tsegaye’s stay in New York was painful in more ways than one, obviously. The same must have provided him with the space to reflect deeply on the meaning of his life. At one end was this Edenic "Boda of holy springs, groves, and ridges;" and at the other end was New York, the quintessence of profligacy. A precocious early teen, a long, long time ago, staged a play on the occasion of Emperor Haileselassie’s visit to his elementary school; half a century later, a humble poet is nearing a bend in the road, his creative engagement as vigorous as ever. Between bookends and the vicissitudes of life, we are offered a terse and revelatory poem to sum it all up.

Thus dreaming dreams that see not the light of day
Tending afflictions that refuse to go away
Weeding seedlings but no growth to survey
Trimming brambles in the path of others, I—
I overlooked to do life my way.

© 2021 by Mitiku Adisu. All rights are reserved. No part of this article and/or the translation may be reproduced or shared without prior written permission of the copyright holder.