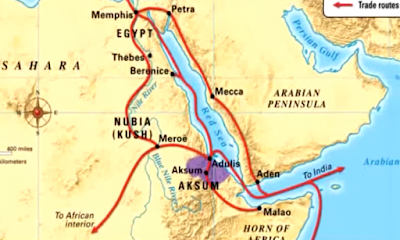 Church Unearthed in Ethiopia Rewrites the History of Christianity in Africa

In the dusty highlands of northern Ethiopia, a team of archaeologists recently uncovered the oldest known Christian church in sub-Saharan Africa, a find that sheds new light on one of the Old World’s most enigmatic kingdoms—and its surprisingly early conversion to Christianity.

An international assemblage of scientists discovered the church 30 miles northeast of Aksum, the capital of the Aksumite kingdom, a trading empire that emerged in the first century A.D. and would go on to dominate much of eastern Africa and western Arabia. Through radiocarbon dating artifacts uncovered at the church, the researchers concluded that the structure was built in the fourth century A.D., about the same time when Roman Emperor Constantine I legalized Christianity in 313 CE and then converted on his deathbed in 337 CE. The team detailed their findings in a paper published today in Antiquity.

The discovery of the church and its contents confirm Ethiopian tradition that Christianity arrived at an early date in an area nearly 3,000 miles from Rome. The find suggests that the new religion spread quickly through long-distance trading networks that linked the Mediterranean via the Red Sea with Africa and South Asia, shedding fresh light on a significant era about which historians know little.

“The empire of Aksum was one of the world’s most influential ancient civilizations, but it remains one of the least widely known,” says Michael Harrower of Johns Hopkins University, the archaeologist leading the team. Helina Woldekiros, an archaeologist at St. Louis’ Washington University who was part of the team, adds that Aksum served as a “nexus point” linking the Roman Empire and, later, the Byzantine Empire with distant lands to the south. That trade, by camel, donkey and boat, channeled silver, olive oil and wine from the Mediterranean to cities along the Indian Ocean, which in turn brought back exported iron, glass beads and fruits.

The kingdom began its decline in the eighth and ninth centuries, eventually contracting to control only the Ethiopian highlands. Yet it remained defiantly Christian even as Islam spread across the region. At first, relations between the two religions were largely peaceful but grew more fraught over time. In the 16th century, the kingdom came under attack from Somali and then Ottoman armies, but ultimately retained control of its strategic highlands. Today, nearly half of all Ethiopians are members of the Ethiopian Orthodox Tewahedo Church.

For early Christians, the risk of persecution from the Romans sometimes ran high, forcing them to practice their beliefs in private, posing a challenge for those scholars who study this era. Christianity had reached Egypt by the third century A.D., but it was not until Constantine’s legalization of Christian observance that the church expanded widely across Europe and the Near East. With news of the Aksumite excavation, researchers can now feel more confident in dating the arrival of Christianity to Ethiopia to the same time frame.

“[This find] is to my knowledge the earliest physical evidence for a church in Ethiopia, [as well as all of sub-Saharan Africa,]” says Aaron Butts, a professor of Semitic and Egyptian languages at Catholic University in Washington, D.C., who was not involved with the excavation.

Harrower’s team conducted their work between 2011 and 2016 at an ancient settlement called Beta Samati, which means “house of audience” in the local Tigrinya language. The location, close to the modern-day border with Eritrea and 70 miles to the southwest of the Red Sea, appealed to the archaeologists in part because it was also home to temples built in a southern Arabian style dating back many centuries before the rise of Aksum, a clear sign of ancient ties to the Arabian Peninsula. The temples reflect the influence of Sabaeans, who dominated the lucrative incense trade and whose power reached across the Red Sea in that era. 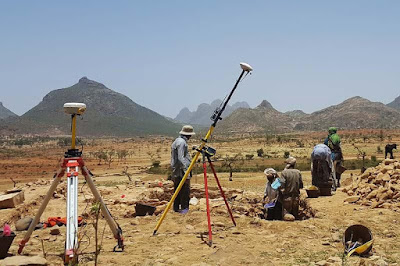 The excavators’ biggest discovery was a massive building 60 feet long and 40 feet wide resembling the ancient Roman style of a basilica. Developed by the Romans for administrative purposes, the basilica was adopted by Christians at the time of Constantine for their places of worship. Within and near the Aksumite ruins, the archaeologists also found a diverse array of goods, from a delicate gold and carnelian ring with the image of a bull’s head to nearly 50 cattle figurines—clearly evidence of pre-Christian beliefs.

They also uncovered a stone pendant carved with a cross and incised with the ancient Ethiopic word “venerable,” as well as incense burners. Near the eastern basilica wall, the team came across an inscription asking “for Christ [to be] favorable to us.” 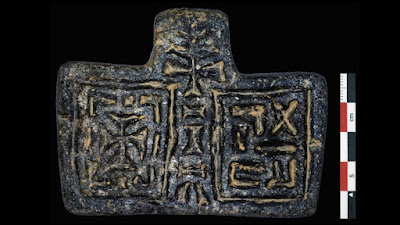 In the research paper, Harrower said that this unusual collection of artifacts “suggests a mixing of pagan and early Christian traditions.”

According to Ethiopian tradition, Christianity first came to the Aksum Empire in the fourth century A.D. when a Greek-speaking missionary named Frumentius converted King Ezana. Butts, however, doubts the historical reliability of this account, and scholars have disagreed over when and how the new religion reached distant Ethiopia.

“This is what makes the discovery of this basilica so important,” he adds. “It is reliable evidence for a Christian presence slightly northeast of Aksum at a very early date.”

While the story of Frumentius may be apocryphal, other finds at the site underline how the spread of Christianity was intertwined with the machinations of commerce. Stamp seals and tokens used for economic transactions uncovered by the archaeologists point to the cosmopolitan nature of the settlement. A glass bead from the eastern Mediterranean and large amounts of pottery from Aqaba, in today’s Jordan, attest to long-distance trading. Woldekiros added that the discoveries show that “long-distance trade routes played a significant role in the introduction of Christianity in Ethiopia.”

She and other scholars want to understand how these routes developed and their impacts on regional societies. “The Aksumite kingdom was an important center of the trading network of the ancient world,” says Alemseged Beldados, an archaeologist at Addis Ababa University who was not part of the study. “These findings give us good insight ... into its architecture, trade, civic and legal administration.”

“Politics and religion are important factors in shaping human histories, but are difficult to examine archaeologically,” says Harrower. The discoveries at Beta Samati provide a welcome glimpse into the rise of Africa’s first Christian kingdom—and, he hopes, will spark a new round of Aksum-related excavations.