The Most Beautiful Cross in the World

The Most Beautiful Cross in the World - The Lalibela Ethiopian Cross 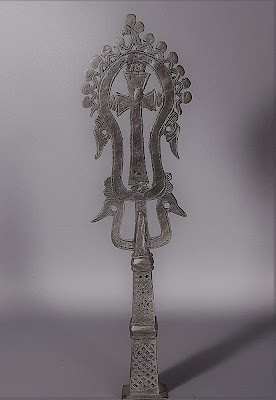 There is no other cross in the world that even remotely shares any design commonality with the Lalibela Ethiopian Cross. This Cross is unique in its highly sophisticated design and how ingeniously the greatest Biblical story is incorporated within its matrix. The first time I saw the Lalibela Cross was when I was a high school student some forty years ago--in another life. Since then until very recently, I thought of the Lalibela Cross as very mysterious and puzzling. Thus, over the years I tried to learn more about this great Cross. At times, I even wondered how it could even be considered a cross.

There are two basic designs of crosses: the Latin Cross and the Greek Cross. Every cross in the world is built around these two underlying designs. I checked thousands of variations, some improvised and others strictly traditional designs of crosses, in books, catalogs, and recently through the Internet. From thousands of cross designs that I checked there is not a single design that could even remotely compare with the originality and beauty of the Ethiopian Lalibela Cross. Thus, I think the Lalibela Cross is a third group that stands for its unique matrix as a third basic design next to the Latin and Greek, all on its own.

Few religious artifacts, as tangible corporeal symbols of Faith, are as venerated, adored, loved, and “worshiped” as the Cross in Ethiopia. Not only the Christian Faithful adorn themselves with a small cross about their person (usually worn on a string or chain around their neck), but also often times non-Christian females wear the Cross as part of their jewelry, at least those young girls I saw in my part of Ethiopia (Dessie, Wollo). Of course, since the cross has a very close design resemblance to the “Anuak,” the symbol of life from ancient Pharaonic civilization, the attraction of the cross for Ethiopians maybe explained as a deep primordial recognition of an ancient symbol through communal subconsciousness.

In this one design the Christian dogma and history of the Church is encapsulated in an exquisitely balanced, expressive design. The Cross is based on two elongated circles intertwined with each other, where one simply continues or merges into the other, symbolizing the temporal and the eternal, or Heaven and Earth, or the Spiritual and the Physical aspects of Creation. The Trinity (God the Father, the Son, and the Holy Spirit) is represented by the three crosses on the vertical axis. The thirteen triangles with small circles on top of each arranged around the crown of the upper oval/circle represent Christ and his Twelve Disciples. And the three pairs of wings on the opposite sides of the lower oval/circle balance the crowning upper design of the Christ with his Disciples. The effect is stunning, that of flawless beauty that transcends time and space.

The simplification of the human body into geometric design of a triangle and a circle is a perfect choice, for the artist could have chosen any number of simplifications. The choice of a triangle with a little circle on top seems to suggest a sitting figure. Thus the over all design not only fully represents the Christ and his Disciples but also suggests a particular historical time in the life of the Christian Church that of the Last Supper--the last communion of man and God.

The wings play a more abstract role suggesting spirituality as opposed to representation of a particular concept of God as the Holy Spirit. This is quite obvious in later developments where the artist seems preoccupied in purely creative search in perfecting this unique design of the Lalibela Cross more than any form of narration. For example, in both Processional and Priest Crosses we see the six side wings simply being integrated in the matrix of the Cross with decoration as a primary motif. This is a significant departure from the spiritual to the aesthetic. In fact, such distinction may even be too shallow to describe the process of metamorphosis underway in the minds of the Ethiopian artists who created such wonderful masterpieces.

The Christ is represented by a triangle that is superimposed on the first cross on top of the oval dome. And the Twelve Disciples are arranged six on each side of the Christ. The genius of the Ethiopian artist is to be seen also in the subtle suggestion one feels from the arrangement of the Christ and the Twelve Disciples, the presence of the “crown of thorns” that the Christ was forced to wear on his way to Golgotha. This Cross is truly a testament of love and faith. The overall effect is of indescribable harmony and beauty.

Within this new or original matrix of the Lalibela Cross you can see variations that are more impressionistic in execution than symbolic representational. For example, the Christ and the Disciples are transformed into a rhythmic vein. Some people might dismiss this further abstraction a result of sloppy craftsmanship, but I believe that it is an aesthetic development of much higher magnitude of abstraction of the basic representational work into an impressionistic and further on as pure design. Whether one looks at these features of the cross as purely decorative the fact remains that the creativity, originality, sense of balance and harmony of the Lalibela Cross is awe inspiring. When it comes to the adulation of the cross, the Ethiopian artist or artists who designed such masterpieces have no equals anywhere in the Christian World.

All great works of art suspend time for there is nothing outside of such works that could be added to enhance or embellish because such masterpieces are self defining and self contained, and we are totally immersed with such works. In their great beauty, they contain all of human experience of the Universe. These artifacts become the center that pulls our human experience and the mystery of existence together; in a way, through art we are forced into becoming one with the Universe.

One may generalize that the genius of the Ethiopian artists who created the Lalibela Cross is not limited to their great structural abstraction, but also extends to their absolute control of the religious symbolism integrated in the cross from overwhelming the overall design. There is absolute balance between each part of the Lalibela Cross. In fact, the Cross seems to be contained by far more profound and subtle narrative just touching the subconscious represented in the general matrix of the artifact. However, one should not forget the fact that the Lalibela Cross is an item of devotion, thus essentially utilitarian. Is that not what religion is supposed to be? A kind of guide to achieve eternal communion with the Creator of the Universe?

I searched far and wide for years going through books and catalogues checking (comparing) thousands of all kinds of Cross designs, but could not find anything that is as sophisticated and as complete, as unique and as beautiful as the Lalibela Cross. It is now clear to me why scholars wrote about the Lalibela Cross scantly and cryptically. They were all as puzzled and as stunned as I once was, that is what I would like to believe had happened.

Some Scholars were quite dismissive in their evaluation of the artistic achievement of those Ethiopian masters. Even Richard Pankhurst, one of Ethiopia’s most distinguished historian, does not seem to pay much needed attention to those great Ethiopian artists who created the Lalibela Cross. Pankhurst wrote, “the basic design of the processional cross, irrespective of the material out of which it was fashioned, was that of an often highly elaborate, and Ethiopianized, Greek or Latin cross…. Though all crosses were of course cruciform in conception, many processional crosses gave the appearance of other forms. Some were thus almost entirely round, and others diamond-shaped. Others again, particularly characteristic of the Lalibela period, were enclosed in an elongated pear-shaped frame, almost like a highly decorated leaf.” Richard Pankhurst, “Ethiopian Crosses, and Their History: Processional, Hand and Neck Crosses,” Addis Tribune, 1997. http://archives.geez.or

In my quest for connection to my nation’s awesome history, I asked few Ethiopians for their ideas of the Lalibela Cross, and their response is very interesting. Almost everyone said that the Lalibela Cross is the most beautiful cross of all of Ethiopian crosses. However, very few were able to tell me what form of symbolism or message was incorporated in the design of the Lalibela Cross. Some did not even know the designation of the cross as the “Lalibela Cross.” That fact did not bother me at all, for by not knowing such narrative, they seem to have experienced the beauty of the cross transcending history and our pedantic categorization of a great masterpiece on its own. In fact, I am more envious of such direct emotional experience of spirituality than the rigor and certainty born out of searching for an elusive truth.