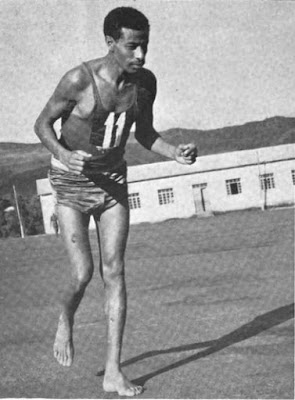 Ethiopia's Victor in the Olympic marathon event in Rome on September 15, 1960, received a hero's welcome for his outstanding feat of snatching the first Olympic Gold Medal for his country in the marathon duel against some of the world's best runners. Long before the time scheduled for the arrival of the plane bringing the Ethiopian Olympic team home, Addis Ababa airport and the city's main streets leading in the direction of the airport began to become crowded with welcoming crowds. All roads appeared to lead not as the saying has it, to Rome, but to Addis Ababa airport.

Reception
Among the packed crowd at the airport were included all categories of the city's population—-high-ranking government officials, white collar workers, and ordinary folk. The Imperial Body Guard, of which the Olympic victor is a member, was well represented. The Imperial Body Guard band, decked out in full dress red tunics and green bloomers was on hand to add music to the occasion.

Hero's Welcome
When the Olympic marathon victor, Abebe Bikila, emerged from the plane's door with the Olympic marathon gold medal dangling from his neck, he was met with a wave of prolonged hand-clapping by the enormous crowd. Descending, he was escorted to a raised platform to receive additional plaudits of the multitude and to be almost overwhelmed with bouquets of flowers in his honour sent by different organisations, including foreign communities, of the city. Abebe Bikila was modest and speechless through all this welcoming honour—seeming to prefer to let his great marathon victory at the Olympics speak for him and for itself.

Procession
But the great welcome did not end at the airport. The marathon victor was raised onto a platform on a bedecked truck, with the five traditional Olympic rings intertwined near him, for the slow drive through the city's packed streets. Behind Abebe Bikila's triumphant truck followed his fellow team members in another truck. As the marathon victor's truck slowly wended its way through packed streets, there was profuse handclapping, singing and dancing in the streets.

Emperor's Congratulations
Arriving at the Imperial Palace, Abebe Bikila and his team-mates were greeted by His Imperial Majesty, who warmly praised Gold Medallist Abebe Bikila for his marathon victory in the following words:

"We are very much pleased, for you have ably shown to the world that sport is neither new nor foreign to Ethiopia.
“We have been closely following the other Ethiopian Olympic athletes who have also done their best. "We see before us your friend who fractured his arm during the bicycle race, and this testifies that all of you have done your best at Olympics.
"We are pleased to witness today the first crowning event of the sports organization which we sponsored in our own lifetime.
"To win the laurel of world victory in a race which demands spiritual and physical strength is a significant event that brings global reputation to our country.
"The precedent laid down by you opens the road for future generations for better hope and greater honours."

The Emperor then graciously decorated Abebe Bikila with the Chevalier of the Order of the Star of Ethiopia.