Home of the Shy, Land of the Brave

Home of the Shy, Land of the Brave 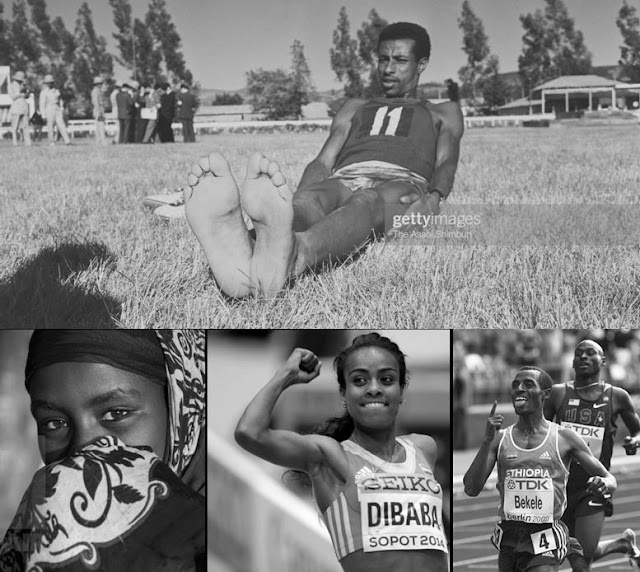 Ethiopians are often portrayed as "shy" people. We are told that Kenenisa is not quite the marketable commodity that Usain Bolt is because he is 'shy’ or to be more precise, ‘diminutive and shy’. It is not surprising that the world has little patience for the long distance; instant gratification is what matters.
"Farm life agrees with "this shy Ethiopian girl" Or "a shy and beautiful Bodi woman from Ethiopia"; "A shy Borana girl from Ethiopia"; "Two shy girls from Aksum." We don’t want to take the "shy thing’ too far, but according to Ortolani et al., most dogs observed in four Ethiopian villages surveyed "are shy and prefer to avoid human contact." Not to confuse men with dogs, "Ethiopian men are generally shy"; "Birdlife abounds and indigenous animals, from the rare Walis Ibex (sic) to the shy wild ass, roam free just as nature intended." Shyly rove, that is.
Emperor Haile Selassie’s advisor, the late John Spenser (1907–2005), described the patriot-humanitarian Ras Imru Haile Selassie as "the mildest of men, shy and retiring" [Ethiopia At Bay, 1984, p.341].
Briggs’ travel guide ventures into reptile territory to observe that "snakes found in Ethiopia are typically very shy and unlikely to be seen unless actively sought." This should be comforting to all who dread crawling creatures, large and small! [italics added]
The Independent once described Haile Gebreselassie as "Ethiopia's shy legend." However, The Telegraph later refuted in no uncertain terms that "Haile Gebrselassie, Bekele's Ethiopian predecessor, was the exception, a man whose omnipresent winning smile, bouncing personality, and unreal talent rode roughshod over the stereotypes."
So do we have any right or recourse to contradict the omniscient and omnipresent media? What needs to happen for us to break free of the prison wall the media has built around us or put a stop to this repetitive mischaracterization? Could it be that "shyness" is confused with stealth? What about the fact that Ethiopians speak Amharic and their interlocutors expect them to respond in English and English manners?
Interestingly, shyness never surfaced when Abebe Bikila ran barefoot along the Caracalla Baths, down the Appian Way, and finished triumphant under the Arch of Constantine in the 1960 Rome Olympics! This was way before the Internet, cable TV, the 24/7 news cycle, or most of the current crop of journalists were even conceived!
Should the word "shy" receive such prominence to describe Ethiopians from all walks of life? Let us see if the description tallied with reality on the ground. According to Mr. Webster, a shy person is
1 easily frightened • a shy cat who hid under the bed every time she heard any loud noise 2 not comfortable around people • a shy person who finds talking to anyone but a close friend to be an awkward and unpleasant experienceSynonyms for shy • backward, bashful, coy, demure, diffident, introverted, modest, recessive, retiring, self-effacing, sheepish, withdrawn In the end, how the rest of the world sees us does impact how we see ourselves, and vice versa. Was Kenenisa’s recent declaration that he is "the greatest" forced upon him by savvy and money-grubbing groups, or was his modesty superficial to begin with? Was the "shy" athlete’s demeanor out of place or uncharacteristic of the high regard Ethiopians place on ትህትና tehtena modesty? So we never forget, Kenenisa was observed sticking out his tongue in public! Is Ethiopian shyness a survival mechanism, a defect, or a misreading altogether of the culture? Do Ethiopians tend to blend in when the turf is unfamiliar but be equally assertive on home turf? Would the application of small doses of Ethiopian shyness make the world a better place?