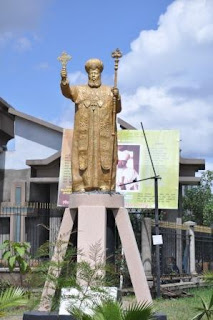 The Fifth Patriarch of the Ethiopian Orthodox Church, Abuna Paulos, died late last night at a local hospital of undisclosed ailment. He was 76. Abuna Paulos was enthroned in 1992, some say, by the current regime while the presiding Father was still living. The Church was split in two, as a result, [the one group going into exile]. Attempts to bridge the chasm, however, could not succeed. His tenure was further marred by controversies and corruption. Especially controversial was the erecting of a life-size statue of himself in front of Medhane-Alem [the Savior of the World] Cathedral at a cost of about $30,000.

Among his achievements are the return of stolen ancient church artifacts from , the reopening of Holy Trinity Theological Seminary shut down by the previous government, and establishment of similar study centers. His plan to reform the hierarchy was, however, met with stiff resistance.

Who his successor will be is still unknown. Many are praying partisan infighting will not break out. Many fear Abuna Paulos’ closeness to the political establishment could allow the government to interfere in the selection and reorganization of the Church.

Pray for Ethiopia. This is indeed one of those trying moments in our history. The Prime Minister has not been heard from or seen in nearly two months; the few who have any information are not talking or talking in confusing terms. And now the head of the one stabilizing institution that is the church is dead. Pray God will raise men and women of peace and wisdom for a time like this.