GOD OF THE HOMELESS

GOD OF THE HOMELESS 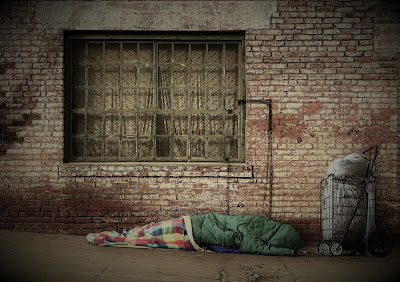 photo credit: ifhomeless.org
GOD SAID HE IS SLEEPING ON THE STREETS TONIGHT WITH THE HOMELESS


GOD said  I should remind people to wash the blankets first before they give them to the homeless, so that it is given with a good heart.  GOD said if you have spare sleeping bags, sleeping bags are better and a small pillow.  GOD said some of them are hungry.  If you have a flask, put a hot drink in it, HE would appreciate it.  GOD said HE is sleeping out on the streets with the homeless.

GOD said if you have any old warm jumpers and spare woolly socks, bring them with you, it's cold!

GOD said don't take the food or clothes to the shelters, they do not need them.  GOD said HE will protect you, come in twos if you are afraid, the people who need it are underneath the railway arches and in the doorways of buildings in the cities and on the streets.

I wrote this song in 1994 after giving MY life to Jesus.  In 1983 I was homeless for about 3 months.  One night I was followed in the early hours of the morning while I was walking the streets after sleeping on people's doorsteps and I didn't feel safe in the big block of flats I was in and I was nearly murdered that night.  I was almost 9 months pregnant and I was only 16 years old.  Take a copy of the song and tell the homeless I love them and I'm sorry that I am in this house and they are on the streets.

GOD said if you have an empty building that you are not using, you can open it up and offer it to the homeless for the winter, because it is cold.

This song is for the homeless.  I AM giving people permission to use this song.  Any money made from this song, all the proceeds must go to the homeless and I don't want the money to be given to a charitable organisation, I want the money handed out on the streets to the individuals who are homeless, worldwide.  I trust people are not going to be selfish.

Someone to talk with me now and then
It could have all worked out different when
Inspiration, you brought me salvation
There were cries of desperation

I had nothing left to lose
I was afraid, the isolation
But what else could I do?
When all I needed was a friend

Someone to talk with me now and then
It could have all worked out different when
Inspiration, you brought me salvation
When all I held was on the line

And my troubled soul grew weary
When I felt numb inside
And nothing more could hurt me
Thats when you came along
Right on time.