The Colonel and Hell

The Colonel and Hell 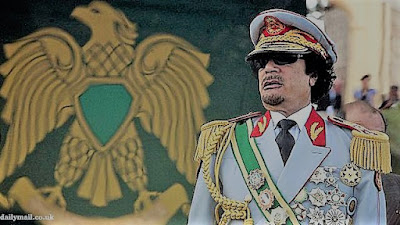 And so the Libyan leader Gaddafi died in the manner he lived. Violently. Every one seemed to be in agreement that Gaddafi deserved to die. There were jubilant street scenes even as the cellphone-video of his bloodied body went viral. Some wished he would go straight to hell. These are thinking people hailing as far north as and . These are the same crowd who more than likely would fight to abolish capital punishment or to uphold due process or rubbish off-hand the existence of Hell and critique the Bible mercilessly for teaching such a "gory and outmoded" doctrine. It now appears there are exceptions to the rule. It is interesting how times like this often lay bare our true intentions, our true nature and the values we thought we've managed to hide. So what do we think of hell? Or more appropriately, what does the Bible teach on the subject? Here is a piece by Tim Keller that, we hope, could make the skeptic and the uninformed to think again. Ed.

In 2003 a research group discovered 64% of Americans expect to go to heaven when they die, but less than 1% think they might go to hell. Not only are there plenty of people today who don't believe in the Bible's teaching on everlasting punishment, even those who do find it an unreal and a remote concept. Nevertheless, it is a very important part of the Christian faith, for several reasons.

1. It is important because Jesus taught about it more than all other Biblical authors put together. Jesus speaks of "eternal fire and punishment" as the final abode of the angels and human beings who have rejected God (Matthew 25:41,46) He says that those who give into sin will be in danger of the "fire of hell" (Matthew 5:22; 18:8-9.) The word Jesus uses for 'hell' is Gehenna, a valley in which piles of garbage were daily burned as well as the corpses of those without families who could bury them. In Mark Jesus speaks of a person going to "hell [gehenna], where 'their worm does not die and the fire is not quenched.' " Jesus is referring to the maggots that live in the corpses on the garbage heap. When all the flesh is consumed, the maggots die. Jesus is saying, however, that the spiritual decomposition of hell never ends, and that is why 'their worm does not die.'

In Matthew Jesus says, "Do not fear those who can kill the body but cannot kill the soul. Rather be afraid of the One who can destroy both soul and body in hell." He is speaking to disciples, some of whom will eventually be tortured, sawn in half, flayed and burned alive. Yet, he says, that is a picnic compared to hell. Clearly, for Jesus hell was a real place, since he said that after judgment day people would experience it in their bodies. Hell is a place not only of physical but also of spiritual misery.

Jesus constantly depicted hell as painful fire and "outer darkness" (Matt 25:30; cf. Jude 6,7,13,) a place of unimaginably terrible misery and unhappiness. If Jesus, the Lord of Love and Author of Grace spoke about hell more often, and in a more vivid, blood-curdling manner than anyone else, it must be a crucial truth. But why was it so important to Jesus? more.